Reflecting 15 years, The “Rights” Side of Life 2020 Survey Launched 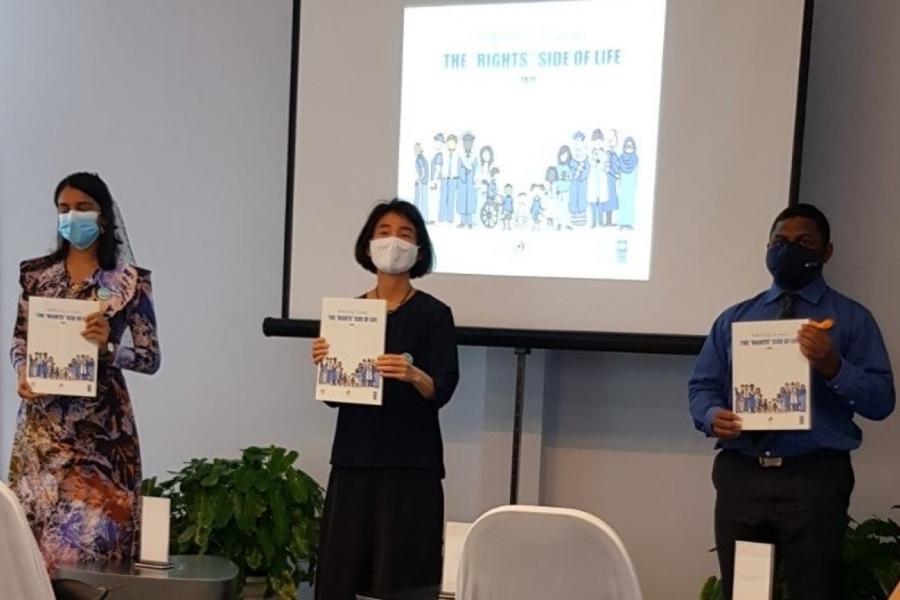 The “Rights” Side of Life is a human rights survey to understand attitudes, awareness and perceptions of the public on a range of human rights issues in the Maldives. The latest survey conducted together with the Family Protection Authority (FPA) also focused on examining the knowledge, perceptions and prevalence of domestic violence in the Maldives.

The survey collected data on these areas to understand the current situation in the country and provide insights on the extent of the additional work required to address any shortcomings. The information helps prioritize future directions for human rights promotion, prevention of domestic violence and assists in identifying areas for more research.

The survey report highlights human rights concerns that have magnified over the years. For instance, the support for gender equality and women’s rights have diminished, and there is a worrying increase in the number of women who did not respond to questions regarding equal rights in the family unit and child custody matters. There is growing concern regarding child sexual abuse - an issue consistently highlighted in all three surveys. The report also reveals the need for more transparent and accountable governance institutions and greater awareness of human rights across the country.

Some of the key findings from the survey report include:

3. Corruption (21.0%) and lack of trust between political parties (20.0%) were considered the leading factors undermining the success of the democratic process.

4. There were worrying responses from a considerable number of people who felt that gender equality and child rights are not compatible with Islam. And it’s concerning that most of these respondents were women.

7. 40.9% of respondents are dissatisfied with the protection and services assured for persons with disabilities.

9.  Majority (63.6%) of the people were dissatisfied with overall health services and especially those from outer islands (62.3%).

10. The number of respondents dissatisfied with the judiciary accounted for at 56.3% of the respondents. Most commonly cited reason for the loss of judicial confidence pertained to corruption at 39.2%.

11. Almost half (46%) of the respondents were convinced that the government was taking adequate measures to improve housing services.

12. More than half (59.0%) of the respondents were dissatisfied over the allocations of resources between administrative atolls and islands.

15. Majority (80.0%) of people said that they knew where to lodge complaints for domestic violence.

16. Most women responded that their husbands were the perpetrators of domestic violence, while most men reported having suffered abuse from previous partners.

"It is crucial that we all do our part to protect and promote core fundamental rights such as the right to life and to bodily integrity that is entitled to all human beings," stated Chief Executive Officer of the Family Protection Authority, Aminath Leena Ali.

The findings of the survey are intended to provide a basis for policy-making and agenda setting to strengthen systems that promote and protect human rights and the rule of law in the Maldives.

“The nation’s efforts to promote and protect human rights while working towards the achievement of the Sustainable Development Goals continue to be challenged by the fragility of the social and political fabric of the country. In the face of these challenges, the third Right Side of Life survey provides valuable data in initiating discussions and dialogues around human rights, state obligations and citizen responsibilities,” said UNDP Resident Representative, Akiko Fujii.