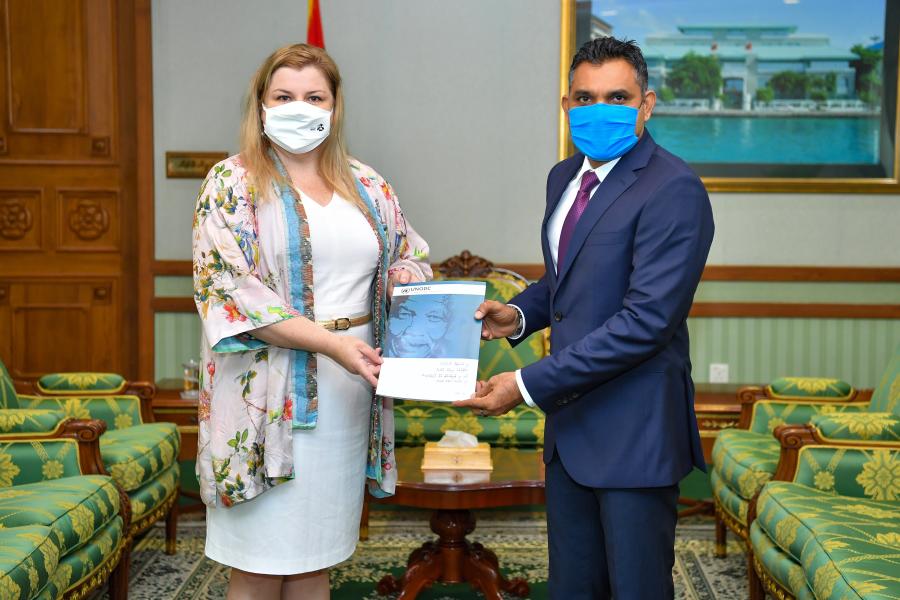 The United Nations Resident Coordinator to the Maldives, Ms Catherine Haswell, has presented a Dhivehi translation of 'The Nelson Mandela Rules' to Vice President Faisal Naseem. The ‘Nelson Mandela Rules’ are named in honour of South Africa’s first Black President, who was imprisoned for twenty-seven years, for his anti-apartheid activities, by the then apartheid regime. The rules outline a comprehensive list of minimum-standards relevant to the just and humane treatment of prisoners.

The Vice President stated that it was his honour to receive this book on Nelson Mandela’s birthday. He expressed that Mr Mandela is a towering and inspirational figure, whose example many global democratic practitioners strive to emulate. He added that he himself strongly admires the former South African President and activist.

The UN Resident Coordinator spoke in praise of the ‘Nelson Mandela Rules’ and expressed her firm view that it is important for all countries to adhere to them in their treatment of prisoners. She highlighted that the principles contained in them are widely referred to international standards, in determining whether countries’ detention facilities, and treatment of prisoners, align with global best practices on human rights. She expressed that she as well as UN resident staff are keen to engage with the Government in the area of prison reform.

Warmly acknowledging her remarks, Vice President Faisal Naseem stated that President Ibrahim Mohamed Solih’s Government prioritizes prison reform and the implementation of a justice system that gives precedence to rehabilitation and reintegration. He detailed some of the Government’s ongoing work in that regard, highlighting its efforts to provide education and job training opportunities to prisoners.

Vice President Faisal Naseem was accompanied at the meeting by the Minister of Home Affairs, Imran Abdulla.https://presidency.gov.mv/Press/Article/23501