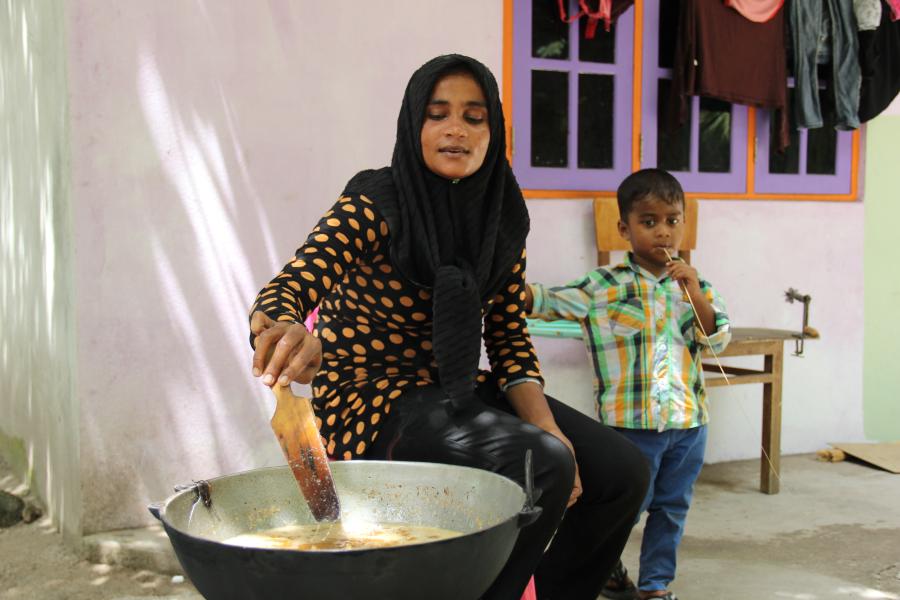 When I was a small child, the most exciting time of the year was New Year. In Japan, families and communities start preparing for the day weeks ahead: shopping for food, cleaning houses and preparing new clothes. Then a complete lockdown comes on New Year’s Day itself.  In the past, shops and all other commercial activities as well as the government used to close for the first three days of the year. Everyone gathered together with their families at home to eat, play games and watch TV, with just one trip out for the first visit of the year to their local Shinto Shrine. I loved the special rituals of the New Year Festival. But more than anything else, I used to enjoy just being at home with my family. Ramadan and Eid holidays in Maldives, and previously in Pakistan and Sudan, always bring back these fond memories from my childhood.

As I grew older, however, I came to learn how women in the family did not necessarily enjoy all the celebrations. Dare I say some even hated the preparations and additional domestic work associated with entertaining visitors, such as cooking all the food, cleaning and looking after children who are out of school on holiday, as all these fell exclusively to the women. And during non-festive times too, there was always that catering to the husband’s expectations: meals which just ‘miraculously’ appear at the right times and hot baths ready at the right temperature every evening. All in a day’s work for women.

Since the government shut down and schools and other establishments closed due to the COVID-19 pandemic, we have been spending days and weeks with our families, which for many may mean several generations together under one roof. We can see people’s imagination and creativity shine through their posts on social media. Various challenges, arts and crafts and music performances fill our feeds along with people’s concerns, hopes and reflections. I also see this time as an unprecedented opportunity to reflect on our gender roles in the family and wider community.

As in many other parts of the world, women in Maldives spend twice as much time doing unpaid domestic and care work as men. So, while women spend on average six hours a day doing domestic chores, men may spend just three hours[i]. Although in Maldives women are on average equally or better educated than men, the average income of women in paid employment is twenty percent lower than that of men; indeed, women are only about half as likely as men even to be in paid employment. For many women, being in paid employment means having two jobs, as they continue to bear the domestic burden. And for women with children without a proper support system, this challenge often becomes unsustainable and professional ambitions are frequently abandoned. This is a story that resonates across the world.

UNDP launched the ‘2020 Human Development Perspectives: Tackling Social Norms’ in March 2020 in advance of International Women’s Day. According to the report, close to ninety percent of men and women hold some bias against women in non-domestic roles, and analysis revealed the invisible barriers women face in achieving equality. About half of the world’s men and women feel that men make better political leaders, and over forty percent feel that men make better business executives and that men have more right to a job when jobs are scarce. Nearly thirty percent even think it is justified for a man to beat his wife!

Throughout the world, we hear many reports about the rise in domestic violence during times of crisis when people are confined to their homes for long periods of time. This may be due to frustration, anxiety over income loss and other psychological effects associated with crises. While COVID-19 may, therefore, represent a risk of increased domestic violence, it could also provide an opportunity to positively reassess current domestic roles. I can imagine many men and women helping each other with the household chores and sharing the care of their children while staying at home during curfews. One possible realization must surely be that, when shared, the burdens of household chores are halved and the pleasures of parenthood doubled. And further, that the bond between wife and husband, brother and sister and other relations are deepened and strengthened. We should use this time to abandon unequal gender roles, and nurture family relations by sharing all the experiences of life at home.

At the government level, too, the response to COVID-19 in the form of economic and social relief packages is an opportunity to tackle gender gaps. If the future means greater sharing of responsibilities of domestic life, then more opportunities for women to contribute to commercial and public life will open up, to the benefit of the whole of society. And more than ever, women should be present at the political table helping shape the government’s response, contributing their perspective in deciding which policies will best benefit both women and men in the recovery from such troubling times.